skip to main | skip to sidebar
Hi everyone, thanks for visiting my blog! You can purchase my work on Etsy, Ebay, or from my website. All images and designs on this blog are copyright by their creators. Be respectful, don't steal.

Steampunk Wands done and for sale!

I finally did it... Early last week I finished all 5 steampunk wand sets and sent three of them off to new homes around the world :). I also decided to keep one for myself. I realized I don't really have much of a collection, even of my own stuff, so I think I'm going to start making an extra one of each wand style just to keep. It's more work, but I think it will make me happier in the long run. 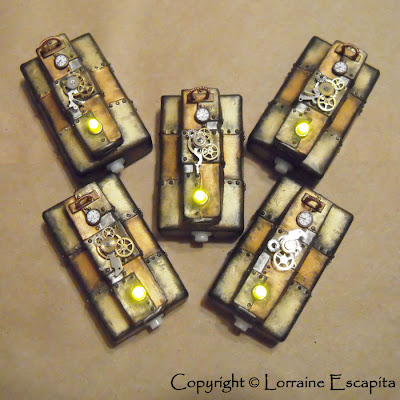 Well, that leaves one steampunk set available for sale. I just received the parts to make more, but that probably won't happen for quite some time. I did make some extra wands though, I'll list those in Etsy. The set with the box and electronics I have listed on Ebay. 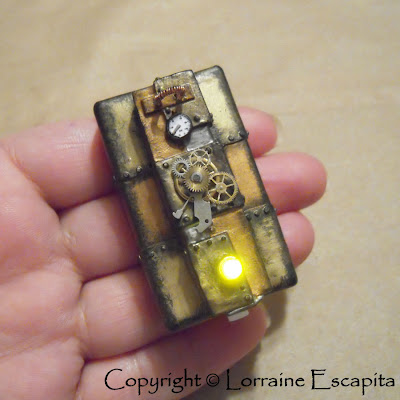 I don't usually sell on Ebay but I have a hard time deciding if Etsy's "first come first serve" way is fair if I only have 1 of a rare or popular item. What do you guys think? I used to sell on Ebay just a little bit, but I wasn't very well known so it was difficult. Etsy has been great for me, I use it as my main selling point.
Oh well, I have many more things coming. I've been busy creating and haven't had time for photos or blog posts but I think I'll have time this weekend to list and post.
Here is the listing for this last Steampunk Set on Ebay.
Posted by Lorraine Escapita at 3:07 PM

For Sale on Etsy